One More Story Games is proud to announce that Kate Edwards, former Executive Director of the International Game Developers Association (IGDA), will be joining our team as an advisor for the company’s initiatives. Edwards is the current CEO and principal consultant of Geogrify, a Seattle-based consultancy for content culturalization. She has worked with multiple companies including working as Microsoft’s first Geopolitical Strategist and providing guidance for Amazon, Facebook and more. One More Story Games’ platform assists authors in developing and publishing narrative games. 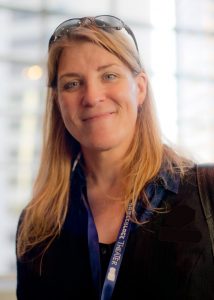 een familiar with the mission of One More Story Games since its earliest days, I’m really excited to join the advisory board and contribute my experience and skills to help this amazing platform grow,” Edwards said. “The potential for elevating game narrative and empowering game creators worldwide is enormous and I look forward to helping the company succeed.”

Kate Edwards has been an applied geographer, writer and corporate strategist for over 25 years. She is the founder and former chair of the IGDA’s Localization Special Interest Group, former board member of the Seattle branch and the co-organizer of the Game Localization Summit at GDC. In October 2013, Fortune magazine named her as one of the “10 most powerful women” in the game industry and in December 2014 she was named by GamesIndustry.biz as one of their six People of the Year in the game industry.

“We’re thrilled to have Kate Edwards join our advisory team, alongside Megan Gaiser, former CEO of Her Interactive. Our company is focused on increasing diversity and inclusion in the game space by lowering the barrier to entry for game creators and these are two strong and vocal supporters for our vision,” says Jean Leggett, CEO.

One More Story Games is an independent games studio in Barrie, Ontario. Its narrative game engine and integrated marketplace, StoryStylus, was developed to help authors create, publish and play narrative games. The company is currently adapting Shakespeare’s Landlord, the first of five novels in the Lily Bard series by #1 NYT bestselling author Charlaine Harris, best known for her Sookie Stackhouse series adapted by HBO, out in fall 2017.