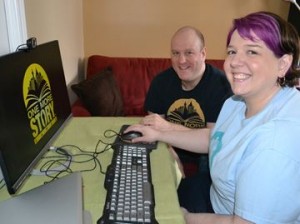 Blair and Jean Leggett are ready to take the video game industry by storm as they expand their One More Story Games business.

The couple is about to ink a deal with a New York Times bestselling author to push their company into the mainstream.

The premise behind One More Story Games is you are an active participant in a story collecting clues as you work your way through a map to solve the case, similar to a choose-your-own-adventure book.

That led to work with Zynga, the creators of Farmville, and Blair saw how video games could take players in different directions.

After he was laid off a few years ago, he and his wife returned to their hometown of Barrie to regroup.

“We decided to do what we love for one year,” Jean said.

That led to One More Story Games.